FROM BEGINNING TO RESCUE

The inaccessibility of the castle hill with almost perpendicular crags reaching to the height of 40 meters attracted prehistoric inhabitants to settle in this locality. At the turn of the 11th and 12th centuries, the first major defensive buildings were built on the travertine rock, which laid the foundation for a later castle. Human resources were needed to boost this massive construction. That is why at this time there was a major settlement, and new villages and towns were established in the whole area.

The fortification provided important protection for the inhabitants living under the castle during the Tartar invasion in 1241. The castle resisted, but the looting of the bloodthirsty horde further emphasized the need to extend and strengthen Spiš’s defenses against external enemies.

The following centuries belonged to various struggles between castle owners. In better days, the castle complex was enlarged and expanded, in worse it deteriorated again.

The castle was of great strategic importance during the anti-Habsburg uprising of Imrich Tököly and Francis II Rákóczi. The army of Emperor Leopold I occupied the castle. The walls of the upper castle were severely damaged where cannons were mounted into the demolished parts. They were pointed in the direction of the road to Levoča. By signing the Peace of Satmar, the Habsburgs secured their control of Hungary and Spiš Castle lost its importance.

The final nail in the coffin for the castle was a fatal fire in 1780. The flames devoured everything that was not of stone. But even the masonry deteriorated under the influence of the weather and began to disintegrate. The events of the two world wars ended the dark period of the great Spiš fortification monument.

Shortly after the war, Spiš Castle was declared a state cultural monument. The status of a National Cultural Monument was granted to it in 1961 when extensive research and comprehensive preservation process of the ruins were initiated. Restoration works are still ongoing.

CASTLE AS A MUSEUM

Today, Spiš Castle is open to public expositions which are managed by the Spiš Museum. The development of the settlement of the castle site is explained by the archaeological site. Especially fascinating is the discovery of Roman coins. This treasure was hidden for centuries by the Dark Cave, winding through the bowels of the castle’s rock.The castle kitchen represents how it probably looked in the castle during medieval celebrations. Visitors will learn that in times of plenty, guests were presented with up to several dozen courses, rich in all then known dishes, with a particularly rich representation of game meat.An inseparable part of the grand celebration was relaxation. For the richest ones, there were bedrooms with a bed in the fortress. And where did the poor lie down? Even that you will learn during the tour at the castle.Testimonies related to tales of justice run chills down the spine. Torture instruments became the tools of truth, guaranteeing the required confessions and fast-closing of cases. Indeed, you can find out about it in the section of the castle dedicated to feudal law.The photographic exhibits include medieval small arms and cannons.CASTLE’S STROKE OF THE SOULDuring the warm summer days and evenings, Spiš Castle becomes a stage for various cultural events. Music concerts are particularly popular.Even the geoglyph, visible from the main road, captivates by its impressive size of 100 x 100 meters. The stone creation, resembling patterns from the Peruvian plains of Nazca, was created under Spiš Castle by an Australian artist in 2008. The stone horse depicts a scene found on Celtic coins. The same motif of a horse on a coin has not been found anywhere else in Slovakia.The hearts of the youngest and romantics will be captivated by the legend of the beautiful Hedwig. What is it about? Visitors can learn about this by visiting one of the most valuable monuments of Spiš. 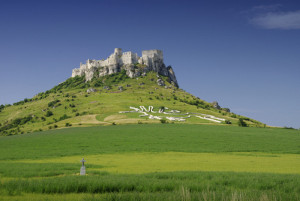