On the site of the former moat, a ceremonial excavation took place in 1872 to commence the construction of the New Evangelical Temple. The Wooden Articular Church was not representative enough and at that time it had structural deficiencies.

The New Evangelical Church was supposed to be in style. That’s why the best architect in the monarchy, Theofil Hansen, was approached. He gave the church the detailed architectural plans as a gift. Due to a lack of finances, the builder did not fully comply with the plans. Therefore, the clock is missing from the tower. Twenty-two winters passed from the time the foundation stone was laid until the temple was completed in 1894.

UNMISTAKABLE FACE OF THE TOWN

Today the New Evangelical Church stands as the unmistakable face of the town. The characteristic red color of the plaster, complemented by green elements, attracts attention, and at the same time makes the building an orientation point. Although the architectural design encourages the misconception that it is an Oriental building, this is not the case. The New Church was built in the so-called eclectic style.

The first thing of interest in the interior is the strict symmetry. A rarity of the temple are the two pulpits. A view through the majestic black portico brings the eyes to the altar space. It is located on the unusual western side. A spacious staircase leads to the altar at the level of the first floor.

Symmetrically spaced benches can seat up to 900 people, where, during the services in the past, men sat on the left and women on the right.

The beautifully symmetric organ, with its 1,869 pipes, is situated at the back of the church in the choir loft. It is still used not only during services, but is also often used during concerts.

Only a few temples have the honor of providing a final resting place to a rulers’ remains. Imrich Thököly (1657 – 1705), Prince of Transylvania, and uncrowned King of Upper Hungary, played an important role in the history of Kežmarok, Hungary and Transylvania. Visitors learn about his life’s story at his grave in the addition of the mausoleum (1909).

Since 1981 the New Evangelical Church has been a national cultural monument.

In close proximity is the Wooden Articular Church (UNESCO) and the exceptional evangelical Lyceum Library with 150,000 volumes of books. The city offers, of course, even more. Lovers of ancient beauty are encouraged to follow the historical route, which will smoothly guide them through the most beautiful and valuable parts of Kežmarok. 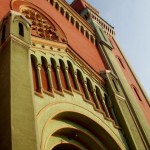 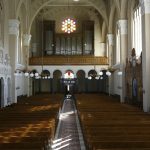 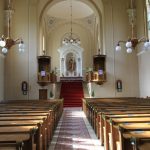 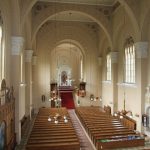 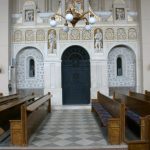 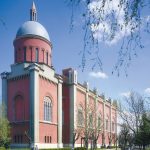