AN INTERESTING HISTORY OF THE CHURCH

After the Lutheran Reformation, which spread like living water all over Europe, the people of Kežmarok proudly identified themselves as Protestants. There was unity in the town’s spiritual affairs. However, the castle lords added wrinkles on the inhabitants’ faces, because the lords claimed the town and demanded ever-increasing taxes. The solution was redemption from under the domination of the castle. However, there were not enough funds for this. Therefore, the people of Kežmarok turned also to the Archbishop of Esztergom with a request for a loan. And they succeeded! So that the Evangelicals would not appear too presumptuous, the town donated three terraced houses on the Castle Square to the Catholic Church. These houses were to be converted into a church.

The church was built in 1654 and dedicated to the Visitation of the Virgin Mary, so we call it Marian. Six years later, the Paulinus order came to Kežmarok. They managed the parish for another 116 years. The order was abolished in 1786, but the church has retained its second name – Paulinus.

THE ERA OF FLAMES

There have been many fires in Kežmarok, but the fire in 1741 will never be forgotten. The Castle Square, together with the church, turned into a huge torch, leaving behind devastation for six years. The people of Kežmarok were taught never to give up, which was why the foundation stone of the new church was laid in 1747, and then completed in 1756. The interior arrangements were continued for decades to come. In the year 1787, as soon as the work was done, another fire devastated the church. For 14 long years, God’s tabernacle remained without a roof and windows. Later, willingness and desire came together and again endless reconstructions took place.

The massive facade of the church is the first landmark in the direction from the castle to the towns’ centre. The interior will pleasantly surprise you with its decorations. The main altar, as well as the side altars, form one harmony. However, the decoration of the pulpit, which dates from the last third of the 17th century and is the oldest preserved furnishing of the church, will not escape the keen eye. The single-nave interior of the church is a perfect example of the building style from the Early, through the High Baroque, to the Rococo finish.

KEŽMAROK HAS A LOT TO OFFER

In addition to the aforementioned castle, which houses the Museum, it is also worth visiting the Basilica of St. Cross and the Wooden Articular Church. The two sacral buildings are connected by a brand of world-class uniqueness – UNESCO. It is ideal to get to know the beauties of Kežmarok gradually, while the best guide is the marked historical path. You can learn more about the historical route at the Kežmarok Information Agency, or directly by watching the numbered signs on the facades of the monuments. 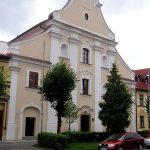