THROUGH FIRES TO BEAUTY

The history of the fortress began to be written in 1463 at the location of the Monastery of St. Elisabeth. The Zápoľský family managed to build a late gothic castle. Over time this caught fire several times, and many reconstructions were done, as the owners of the castle changed.

The last big fire destroyed the building complex in 1901. The castle grounds fell into ruin for many years. It was not until 1931 when a partial reconstruction was completed, and the Municipal Museum was established in the tower. During the Second World War, the Gestapo had its headquarters in the castle.

A major rebuilding of the castle started in 1960 and with some longer breaks lasted until 2019. Apart from its new look, the rarity of this town castle is the fact, that it is one of the few fortresses which do not stand on a hill.

EXPOSITIONS WORTH YOUR ADMIRATION

The exposition of the local guilds is very unusual, and the phenomenal town hall chamber, in which all decisions about the town’s fate were made. No less interesting is the collection of old weapons and firearms. A big surprise of the whole exposition is the period pharmacy, which always astonishes visitors.

Another attraction is the tower dungeon, which offers a beautiful view of the entire town, but also a majestic panorama of the High Tatras.

Of course, the Jewish community, the delightful chapel and the expositions of the Snowy hills, as the High Tetras were sometimes called, also have their place in the museum. You will be fascinated by the exposition of historical cars, which you should definitely see.

THE FIRST WOMAN IN THE TATRAS

The castle abounds with legends. The most famous, and true, is one about a strange love. Because of his empty treasury, Albert Lasky asked the wealthy widow Beata Ostrogska-Koscieleska to marry him. The twenty years older newly-wed wife admired Albert, but she admired the Tatras even more. In 1565, as the first woman to visit the Tetras, she went on a hiking trip to Zelené Pleso (Green Lake) in the hope, that she would see in its depths a gemstone coloring the water. Discovering the beauty of nature was, however, ill-fated for her. Upon her arrival home, her husband had her put in the dungeon. She was fed small bits of food through a window, and through another window she could look at the reason for her misery – the majestic peaks. Years of being imprisoned deprived her of her sanity. She was set free only by the new owner of the castle Rueber.

ONLY A COUPLE STEPS FROM THE CASTLE

Only three minutes on foot in the direction of the center is the beautiful exposition of the Museum of Interior Styles (Main Square 55). St. Mary’s (Pauline) Church is also interesting for its placement in the line of row houses at Castle Square 53. The town has a lot to offer. For lovers of antique beauty, we recommend the historical route, which smoothly leads through the most beautiful and valuable of what Kežmarok can offer you. 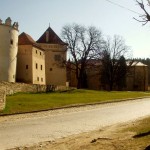 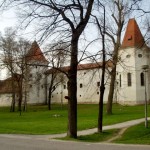 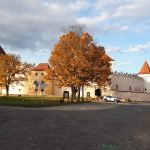