Preparations for the construction of the Red Monastery began around 1320. The stone foundations were laid after the year 1330 and the construction lasted for some decades. Among the first to be built were the residential cells with gardens for the monks. The construction of the Church of St. Anthony the Great was started in 1360. Due to the turbulent times, the monastery complex was walled in on three sides. The fourth enclosed side consisted of an agricultural building with a gateway. The Monastery of the Carthusian Order withstood various assaults for almost 250 years. It was eventually defeated by the devastating incursions of looting soldiers and in 1563 it was shut down.

This was followed by a hundred and fifty years of secular activities that left a significant mark on the monastery. The property was forfeited for financial reasons many times and often changed owners. Then the Rákoczy family began to take better care of the property and the monastery served as a border fortress. At that time the monastery and the nearby village acquired the name Rubrum Claustrum (Red Monastery – Červený Kláštor) because of the red roof of the abbey.

In the 18th century Camaldolese monks settled in the monastery. Some structural changes and adjustments were made. The properties belonging to the monastery had to endure some troubled times of disputes. The residents of Červený Kláštor perceived the abbey’s administration under the Camaldolese monks in a positive way. The reason was perhaps the fact that the monks abided by a strict pledge of silence.

A visible sign of progress for the whole region was the management of a pharmacy. The medicine produced in the monastery was sought after even from abroad. Among the most famous managers of the pharmacy was Brother Cyprian. He improved the pharmacy to such an extent that it became known in the whole of Hungary.

As a result of the enlightenment reforms of Joseph II, Camaldolese monks left the monastery in 1782. Even after the departure of the order the local residents did not lose their hope that the monastery could further serve for the whole region of Zamagurie. Joseph II called settlers from Swabia (Germany) to live on the abandoned properties. The following period brought much deterioration.

The austerely furnished spaces of the exhibition halls evoke an ancient atmosphere. The monks lived simple lives, so the content and the form of the presented items correspond to that simplicity. The dried herbs on display are very authentic and will surprise you with their pleasant aroma.

The sacral part of the exposition is very photogenic thanks to the ceiling paintings. You can also spend pleasant moments in the spacious courtyard which has a well and a sundial. For those who want to enjoy real romance, they can visit the Museum of Červený Kláštor during the winter months, when the whole premises are covered by a mantel of snow and you can enjoy the beautiful view of the Tri koruny (Three Crowns).

The legend of the flying Cyprian has many forms, one of which has been made into a movie. The traditional legend tells the story of a very smart friar Cyprian, who longed to be able to fly. He dreamed about it day and night. In his dreams he saw an angel who spoke to him and tried to talk him out of constructing wings. During the day he did not see the angel, so the courageous Cyprian constructed a glider. He climbed to the top of the Tri koruny and threw himself fearlessly from a rock cliff. Surprisingly, the flying machine worked and it took the monk as far as the Morskie Oko (Eye of the Sea) in Poland. There he was seen by the angel from his dream and the angel sent a thunderstorm down on the flying monk. A bolt of lightning struck the daring man and he fell onto the shore of the mountain lake. Exactly at the point of impact a rocky hill grew up and which is known as the Mních (Monk) until today.

WHERE TO GO IN THE REGION OF ZAMAGURIE

The whole area has a lot to offer. The village of Ždiar with its museum – Ždiarsky dom (House of Ždiar – 38 km) is well-known. The Chodník korunami stromov (Treetop walk) in Bachledová dolina (45 km) is also famous. History lovers will be impressed by the town of Kežmarok with its Town castle and the Wooden Articular evangelical church – UNESCO World Heritage (38 km). 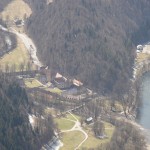 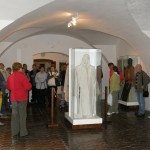 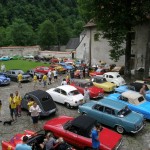 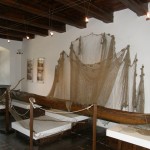 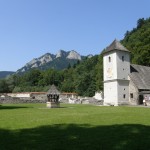