Founder of modern optics, physicist, mathematician, and inventor Jozef Maximilián Petzval was born on the 6th of January 1807 in Spišská Belá. He studied in nearby Kežmarok, and in Košice, and achieved his higher education at the University of Pest.

By 1837, he had already been appointed a professor of higher mathematics, which enabled him to give lectures at the University of Vienna. He became a member of the Vienna Academy of Sciences as well as the Hungarian Academy of Sciences.

For his great contribution, he is known as one of the most important European scientists of the 19th century. He was the first to accurately figure out the construction of a photographic lens. As a result, portrait and landscape lenses have been improved. He discovered and documented the laws which optics follows to this day.

The J.M. Petzval Museum is located in a late-renaissance building of a former school. An additional story was added to the original ground floor in the 18th century. Today, the whole building is open as an exhibition belonging to the Slovak Technical Museum in Košice.

It is not a classical sterile museum that will only delight a handful of experts. On the contrary, the rooms breathe with history and are tastefully complemented by period furniture, paintings, and accessories. But this is not all. Several plaques in the exterior and interior commemorate the greatness of the person to whom the exhibition is devoted, from the moment you enter.

The chronological arrangement guides visitors through photographic and cinematographic equipment and aids, to provide a comprehensive overview. Early photo technics in wooden crates can seem almost comical to the eye today. In the times of Petzval, however, these exclusive pieces represented the pinnacle of modern technology and optics.

CAMERA OBSCURA WITH YOUR OWN EYESParticularly attractive is the part of the exhibition devoted to the camera’s predecessor called the camera obscura. It is a wooden cabinet with holes. It was used mainly by painters, as it projected a flipped image onto paper. Then, it was sufficient to trace the captured image, thus preserving the perspective and the realism in the result.WHAT MORE WILL YOU SEE?The first travel instruments for reporters and devices for the first stereography are also attractive. The eye-catching studio instruments impress with their massive construction. The film roll machines and the smallest-sized spy pieces also have their place in the exposition. It also offers the opportunity to admire the latest lenses in a historic design of metal tubes with engraving.Younger visitors will appreciate a look into a black darkroom and the ladies will be enthusiastic about the romantic period studio with life-size mannequins.WHAT SPIŠKÁ BELÁ OFFERSJust a few steps away is the Museum of Dr. Michal Greisiger. You can admire the treasures of nature in the nearby Belianská jaskyňa (cave). An English park with a manor house and a unique collection of paintings by Ladislav Mednyánszky can be found in the Strážky district. 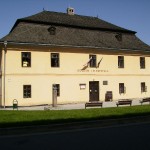 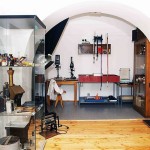